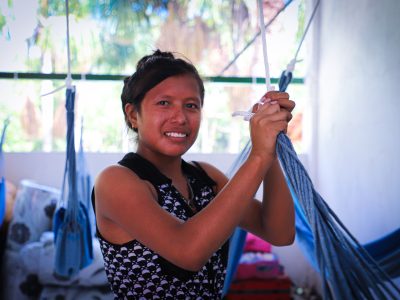 The new DPRNM model provided to asylum-seekers in Brazil facilitates access to rights.

When a person formalizes a request for recognition of refugee status in Brazil, the Federal Police issues a «Protocol of Request for the Recognition of Refugee Status». According to Law no. 9.474, of July 22, 1997, this authorizes the person to remain in Brazil until a final decision is made regarding their request. The Protocol includes a specific registration number for their asylum application that will be assessed by the National Committee for Refugees (Conare).

The registration number is individual, but sometimes a number of people are included in the application for asylum. This previously caused administrative problems for other procedures, such as obtaining a voucher to help pay for transport, enrolling their children in school and others. In addition, although the Protocol is an official document, it did not have sufficient security measures.

For this reason, and as a result of DecreeNo.9,277 of 5 February 2018, the Federal Police began to issue a Provisional National Migration Registration Document (DPRNM) in 2018 that was free of charge to people applying for asylum. In early 2020 and following the issuing of Federal Police Order No.11,264 of 24 January 2020, a new DPRNM was established. The characteristics of this new registration document make it a good practice.

The new DPRNM is issued by the Federal Police in the form of a plastic card and has security measures such as a QR Code (two-dimensional barcode); OCR (Optical Character Recognition) code; phantom photography; optically variable device (OVD); multicolor ultraviolet printing; and OVI security ink.

Because its validity is determined by the refugee protocol, the DPRNM does not need to be renewed annually. This is because it is conditioned to the validity of the protocol, which will be renewed annually by the Federal Police until there is a resolution issued by CONARE. The document states the individual National Migratory Registration number of the foreigner. If the person is granted asylum, their identification number remains the same.

The DPRNM is intended to be an identification document used by the applicant for asylum until a final decision on their application is made by CONARE regarding the provision of international protection and a regular migratory status. The DPRNSM allows its bearer to enjoy rights in Brazil without being excluded from society and public institutions. This includes the issuing of a digital work portfolio and a CPF (individual registration number) that allow the person to earn an income in the country, open bank accounts with entities that form part of the national financial system; and access to public services including education, health and social assistance.

Impact of the COVID pandemic on implementation:

Use of the Asylum Capacity Support Group mechanism: